"Overview of the Current Legislative Session"
Keynote Speaker: Lieutenant Governor Tim Griffin
Tim Griffin grew up in Magnolia, a fifth-generation Arkansan and the youngest son of a minister and teacher. He was elected lieutenant governor of Arkansas on November 4, 2014, and was re-elected for his second four-year term on November 6, 2018. He is focused on growing jobs through aggressively pursuing economic development, more parental choice in education and boldly reforming state government. For 2019, he is serving as Chairman of the Republican Lieutenant Governors Association (RLGA).

From 2011-2015, Griffin served as the 24th representative of Arkansas’s Second Congressional District. For the 113th Congress, he was a member of the House Committee on Ways and Means while also serving as a Deputy Whip for the Majority.  In the 112th Congress, he served as a member of the House Armed Services Committee, the House Committee on Foreign Affairs, the House Committee on Ethics and the House Committee on the Judiciary. He also served as an Assistant Whip for the Majority.  In Congress, he advocated for bold tax reform and entitlement reform to grow jobs and reduce the national debt.
Griffin has served as an officer in the U.S. Army Reserve, Judge Advocate General's (JAG) Corps, for over 23 years and currently holds the rank of colonel. In 2005, Griffin was mobilized to active duty as an Army prosecutor at Fort Campbell, Kentucky, and served with the 101st Airborne Division (Air Assault) in Mosul, Iraq, for which he was awarded the Combat Action Badge.  He is currently serving as the Commander of the 134th Legal Operations Detachment (LOD) at Fort Bragg, North Carolina. Prior to his current post, Griffin served as senior legislative advisor to the Under Secretary of Defense for Personnel and Readiness at the Pentagon. In July 2018, Lieutenant Governor Griffin, in his capacity as a Lieutenant Colonel in the United States Army Reserve, received his master's degree in strategic studies as a Distinguished Graduate from the United States Army War College, Carlisle Barracks, Pennsylvania.

Tim is active in the community.  He currently serves on the board of Our House shelter for the working homeless and previously served on the boards of the Florence Crittenton Home for unwed mothers and Big Brothers Big Sisters of Central Arkansas.

He graduated from Magnolia High School, Hendrix College in Conway and Tulane Law School in New Orleans and attended graduate school at Oxford University in England. His wife Elizabeth is from Camden, and they currently live in Little Rock with their three children, Mary Katherine, John, and Charlotte Anne. They are members of Immanuel Baptist Church of Little Rock. 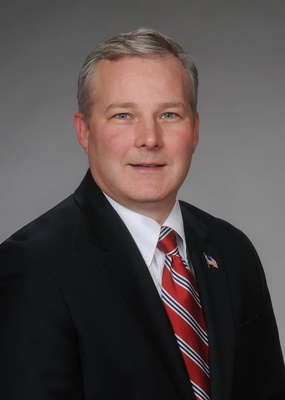 Friday, March 5th, 2021
Program begins at 7:30 AM
Networking before and after the program

You may pay with a credit card through the registration link or cash, check, or credit card payments will also be accepted at the door.

Payments for less than $20 will not be invoiced.